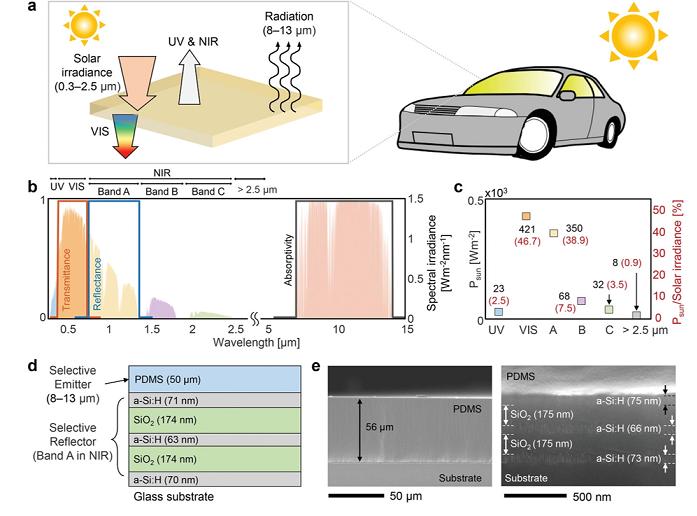 
Since the Paris Climate Agreement that took effect in 2016, 121 countries have pledged to become carbon neutral by 2050 as the world tries to reduce its fuel consumption. The Korean government also unveiled its 2050 Carbon Neutral Strategy on December 7, 2020 and declared Carbon Zero, making transition to new and renewable energy a topic of conversation. Recently, a joint research team from POSTECH and Korea University has developed a radiative cooling material that can reduce energy consumption by selectively reflecting or transmitting sunlight.

A research team led by Professor Junsuk Rho, Ph.D. candidate Minkyung Kim, and Dr. Dasol Lee of POSTECH’s departments of mechanical engineering and chemical engineering, and a team led by Professor Heon Lee and Soomin of the Department of Materials Science and Engineering at Korea University have together developed a transparent radiative cooler that transmits visible light while reflecting near-infrared light, and radiates heat in the atmospheric window where the wavelength range is between 8 and 13 micrometers (μm). Recognized for its significance, this study was featured as the front cover paper of the latest issue of Advanced Optical Materials.

Radiative cooling is a technology that lowers the temperature of an object by absorbing less energy from the sun and emitting radiant heat. Conventional radiative cooling materials developed so far have been limited to transparent emitters that transmit all light under direct sunlight and opaque radiative coolers that reflect all solar energy. For this, transparency is an important characteristic in practical applications of radiative cooling, but the transmitted sunlight trapped in an inner space is generally the main cause of the increasing temperature.

The joint research team focused on developing a transparent radiative cooler to solve this problem. Taking advantage of the characteristics of light, the researchers proposed a material that can transmit visible light, reflect near-infrared light, and emit mid-infrared rays.

The radiative cooling material developed by the researchers in this study exhibits both transparency and radiative cooling effect by selectively reflecting near-infrared light. In an outdoor rooftop experiment, the researchers found that the interior temperature of the high-absorbing chamber in the cooler box was lowered by 14.4 °C and the temperature of the material itself was lowered by 10.1 °C even when paint was applied.

“The radiative cooler developed this time can be used as a window of a building or an observatory that needs to maintain transparency, or as a window in an amusement ride or a vehicle,” explained Professor Junsuk Rho of POSTECH. “It can even take on color because it retains its cooling effect when paint is applied to it.”

This research was conducted with the support from the Future Materials Discovery Program, Mid-Career Researcher Program, Global Frontier Project, Leading Research Center Program of the National Research Foundation funded by the Ministry of Science and ICT of Korea, the Global Ph.D. Fellowship of the Ministry of Education and the National Research Foundation of Korea, Green Science program funded by POSCO, and POSTECH’s PIURI Postdoctoral Fellowship.

Disclaimer: AAAS and EurekAlert! are not responsible for the accuracy of news releases posted to EurekAlert! by contributing institutions or for the use of any information through the EurekAlert system.

Want a Better PC? Try Building Your Own

Want a Better PC? Try Building Your Own