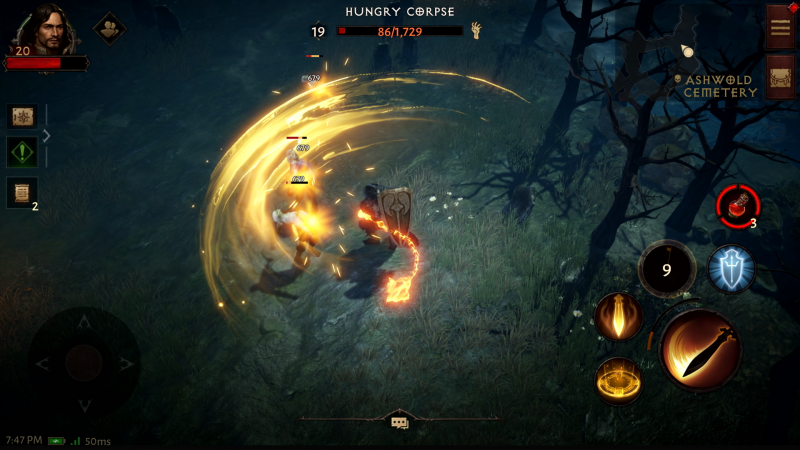 AI Reveals the Most Human Parts of Writing

Ditch Your USB-A Dongle and Embrace the USB-C Life


Blizzard is launching its first big Diablo mobile game this week, and I’ve had it on my phone for the last handful of days, putting it through hell for review. Unfortunately, I wasn’t able to see everything that Diablo Immortal has to offer after spending over 15 hours with the free-to-play handheld action RPG, but in lieu of a full review, I’d like to share some thoughts on my time with Immortal as the game is soon to be available for everyone to play on mobile devices and PC.

Much of Diablo Immortal is designed to look, sound, and feel like Diablo 3, and in my time leveling a Crusader, it nails those lofty expectations effortlessly. Never once during my time slaying the minions of evil have I felt like this was a reskin of another mobile game, imposter using the Diablo name, or that it falls short in what feels like a Diablo game. From the impact of weapons to the fluidity and intuitiveness of using skills, Immortal feels like a real deal Diablo experience. Its responsive controls have some of the best feeling virtual analog sticks and buttons I’ve used in a mobile game. As is a common setup for mobile action games, your main attack is the largest button displayed on the bottom right corner of the screen, with four additional abilities fanned out around it. Pressing one of these special abilities often causes a reticle or an area of effect indicator to appear on the ground. Holding and sliding my thumb in any direction around that button aims my chosen implementation of devastation in a natural way. You can make some adjustments to this system in the settings, but I found the stock setup to be just right for me.

Combat is fun and fluid. Due to having analog control over the character, there’s more mobility than the traditional point-and-click Diablos. Rifts return in Immortal and remain just as fun as their D3 counterparts, albeit a bit quicker to account for shorter mobile gameplay sessions. Because of the added mobility and smooth controls, I have a great time ripping through rifts and rebuilding my character’s equipped skills to optimize my path of destruction.

Legendary armor and weapons return and once again modify an ability for your class, which can range from a damage buff to completely changing the properties for an attack. For instance, my Crusader is equipped with a chest piece that morphs Sweep Attack, which normally hits in a cone-like area in front of me, and turns it into a spinning flail that can be used while an energy bar drains, hitting everything in a circle around my character. A myriad of possibilities exists for each class in terms of builds and modifications from legendary gear that will most likely keep the endgame meta of Challenge Rift leaderboards and PvP arenas fresh for quite a while. Additionally, Immortal offers a rotating selection of recommended builds for people who may not have the aptitude for putting optimized gear builds together, which smartly grants ideas and aspirations for specific gear pieces for players to obtain.

Speaking of PvP, I’ve only just started to get a taste for what those modes offer but can’t get too deep into them here for lack of experience playing them. Once a player hits level 43, you can have the opportunity to join one of two factions, the Immortals, a group sworn to keep demonic forces at bay, and the Shadows, who keep the Immortals on their toes in making sure they are worthy of their duty. Because early access has had so few people to play with and fewer players who made it to that level, I couldn’t properly test out how PvP and factions work in a meaningful way. There are also eight-player PvE raid encounters, but once again, I couldn’t find enough participants to try them out before launch. 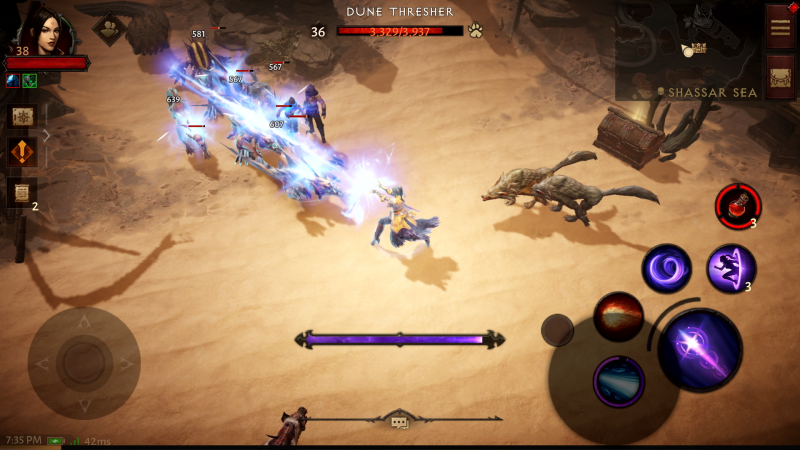 Immortal’s main story drives the leveling experience until it gets to be a dreary, desperate grind, which often detrimentally halts the experience. The story takes you all across the world of Sanctuary, meeting new characters and old favorites like Charsi the blacksmith and Akara from Diablo II’s Rogue Encampment. Taking place between D2 and D3, Immortal teams players up with Diablo mainstay Deckard Cain – who is thankfully still alive during this time period. Together, your goal is to collect and destroy the shards of the Worldstone that shattered during the events of Diablo 2. A new terror from Diablo’s ranks named Skarn rises to fill the void in the demonic forces left in the absence of the Lord of Destruction. I love that Immortal unfolds in the 20-year gap after the slaying of Baal in Diablo 2, and cleaning up that mess is a logical way to build around the events of this game and visit new and old areas of Sanctuary. It often feels like a more cohesive world than other Diablo titles, with zones being bespoke areas instead of randomly generated, which surprised me in how much I don’t miss the world being a mystery each time I step into it. That could change when I roll new characters in the live servers, but for now, I’m fine with the Rift content’s procedurally generated environments in favor of a more living feeling world.

Unfortunately, the main story quest is level locked at times, which caused plenty of frustration as I was trying to get my Crusader to Immortal’s endgame. Once you run out of single-player content and achievements to collect experience from, you only have a few finite ways to try to level up, such as daily/weekly bounties, Elder and Challenge Rifts, or participating in random events that occur in each zone. However, once I mined those clean, the resulting options of farming mobs in the world or repeated Rift grinds for little gain had me feeling like I was spinning my tires and wasting time. Immortal lacks the difficulty options of Diablo 3, which would give bonus experience for taking on harder enemies, and its sorely missing a similar mechanic here.

Considering the free-to-play model it’s built on, how I feel about the monetizing of Diablo Immortal is still up in the air for me. Much of what’s for sale in the Immortal shop is cosmetics like armor and weapon skins. However, there are also crafting materials for sale, and Eternal Legendary Crests, which guarantee a legendary gem to drop from Elder Rifts (that you do still have to play through and defeat), which can be used by a player to socket into their own gear or to be sold on the in-game auction house. Those same Eternal Legendary Crests can also be purchased with a currency earned by playing, but only one per month, while spending money doesn’t look to have a limit. None of the monetizations feels exceptionally scummy on the surface, but I also don’t have enough information to know how much items like legendary gems make a difference in the long run of gearing and progression.

There’s still plenty I need to see in hitting max level, experiencing group content in both PvE and PvP scenarios, and experiencing what this game is like with a full server of players. I’m really enjoying my time with Diablo Immortal so far, and as I said above, it is nailing that modern Diablo feel on a phone. In my short trek carving my way through this unexplored time in Sanctuary’s history, I’ve had a great time. It’s hard not to recommend joining the fight against the hordes of hell, especially when playing it feels so damn good.

msci: What is the MSCI India Index and why it matters