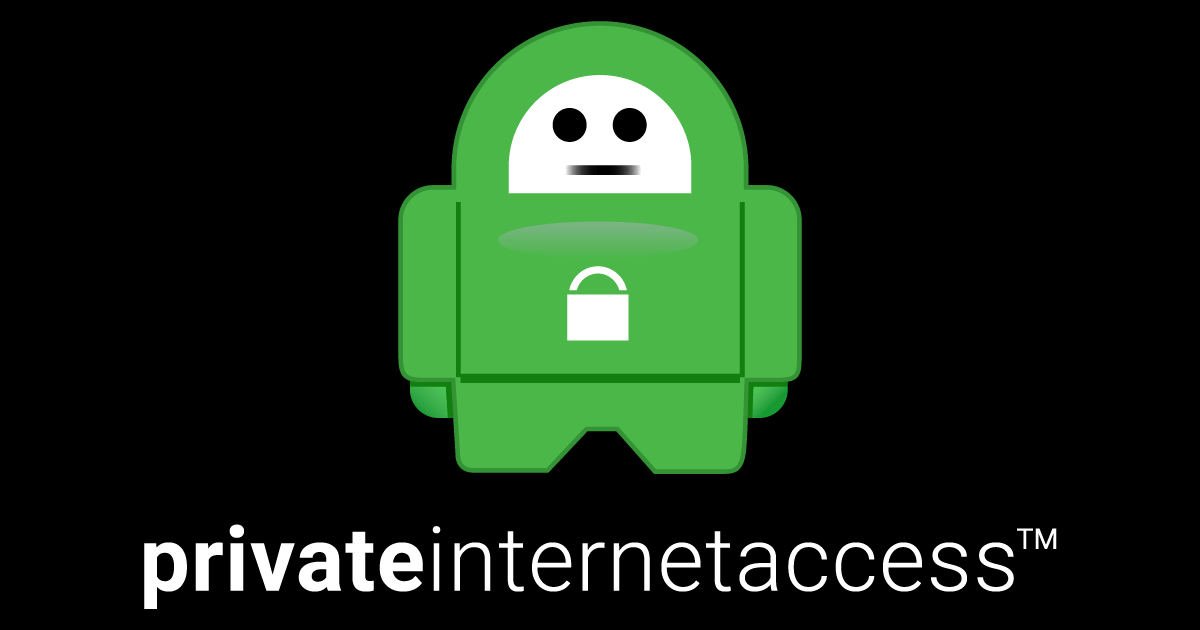 Apple Tracks You More Than You Think


With the VPN market ever-increasing in size, it can be a challenge to identify a credible provider. Many factors need to be considered, including a VPN provider’s history, customer reviews, and hands-on testing. One popular service provider is Private Internet Access (PIA) VPN.

PIA claims to have a no-logs policy, but is it worth trusting them with your online privacy? This detailed hands-on review elaborates on the key features and performance of Private Internet Access (PIA).

Private Internet Access (PIA) is a resilient VPN that stood firm over the years. Despite all the VPN bans, crackdowns, and other hindrances compromising users’ privacy, PIA VPN has demonstrated its keenness towards netizens’ internet freedom.

Besides protecting users’ privacy, it also ensures unrestricted access to global geo-blocked websites. PIA has set up a vast server network covering over 83 countries, thus allowing their clients to connect to almost every critical geo-location around the world.

The service was established in 2010 with a vision to bring privacy to the masses. While the service is headquartered in the United States, PIA have always maintained that they retain no user logs, which they eventually proved during a lawsuit. This ultimately allowed PIA to become a popular VPN service.

In 2019, Kape Technologies (previously, Crossrider) announced acquiring Private Internet Access. (Later, the same company acquired ExpressVPN too.) Today, PIA is among the most trusted VPN providers that offer unique security and privacy features on top of the essential VPN services.

PIA VPN has always offered top-notch privacy features over the years. Here’s a quick review of the most important features we found when using Private Internet Access VPN .

PIA VPN offers top-notch AES encryption to its users. But the technology isn’t limited to AES 256-bit only. Instead, it leaves it to the users to choose between AES 128-bit and AES 256-bit (the former being the default configuration). 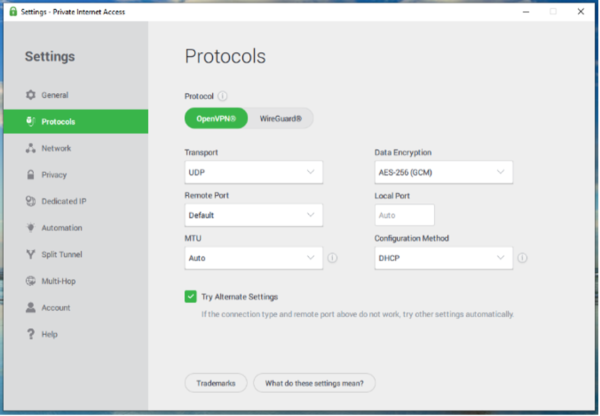 While AES 256-bit is the industry standard and the norm for most other VPNs, PIA’s offer for AES 128-bit encryption empowers users to browse at faster speeds without compromising security. As a result, it’s a helpful choice when users with a slow base speed.

To configure this option, users should go to the “Settings” menu and select the “Protocols” tab. Here, users can not only configure encryption but also set the appropriate connection protocols (OpenVPN or WireGuard) and adjust other settings.

Global Server Network with Presence In All 50 US States

The other impressive feature with Private Internet Access is the massive server network offering a wide choice of locations. (More than what NordVPN and Surfshark offer.) But unlike NordVPN, which enables users to choose a specific server from a particular location, PIA provides a list of locations and chooses the best server for you at that specific location.

The most exciting thing is that Private Internet Access offers dedicated servers from all 50 states of the USA. This choice of locations not only empowers users to unblock US-restricted content abroad but also enables users within the USA to access content from other US states. Simply put, it means you can,

In addition to offering regular and geo-located servers, PIA has optimized a few servers from various locations for streaming. It allows one-click access to your favorite content library on any platform.

For example, to unblock and stream Netflix US, you can connect to either of the two US streaming-optimized servers.

Interestingly, PIA offers the multi-hop feature for more privacy-centric users, rerouting their traffic twice before connecting to the internet. 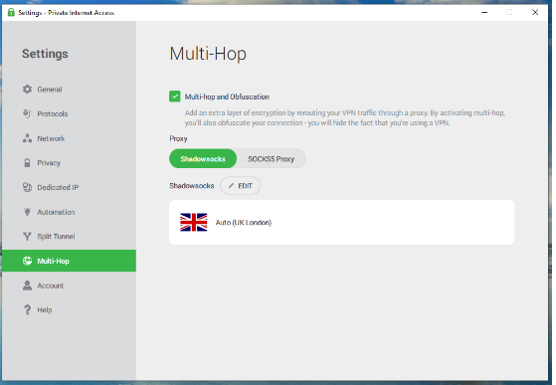 PIA VPN has an interesting kill switch feature that you can find via Settings > Privacy. Here, the first option mentions the “VPN Kill Switch,” which works exactly the way you expect – disconnecting the internet traffic when the VPN connection disrupts. 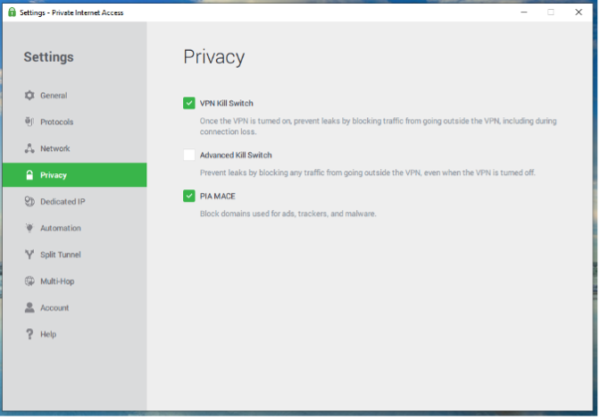 Another option – the “Advanced Kill Switch” – warrants watertight privacy by disconnecting the device even when the VPN is off. It’s a valuable feature for regular VPN users who may forget to turn their VPNs on every time they start their device.

Under the “Privacy” tab, you can find the simple option to activate the MACE ad blocker – PIA’s very own ad and malware protection feature that fends off malicious scripts, web trackers, ads, and other malware while browsing.

Split tunneling isn’t enabled by default. So, if you need to activate this feature, you can do so via the Settings menu. Here, checking the “Split Tunnel” box first installs a dedicated filter. Then, you can configure this option by limiting specific apps to use or not use the VPN tunnel during an active connection. 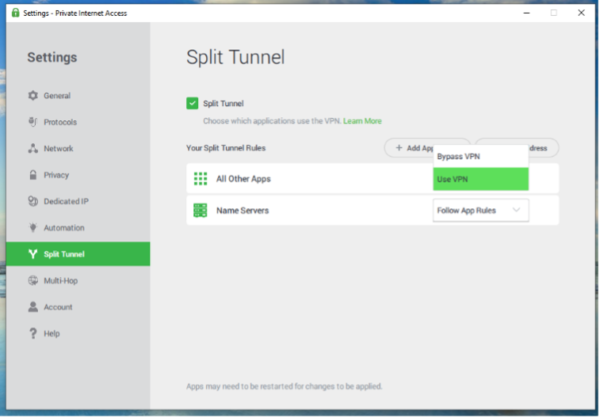 Another option, available on PIA desktop VPN apps (Linux and Windows), is managing the split tunneling at the DNS level. By default, the “Name Server” option is set to “Follow App Rules,” which directs the traffic as follows.

You can configure this option to “VPN DNS only” to direct the traffic from all apps via the VPN DNS.

Similarly, you can configure the split tunnel according to IP addresses (both IPv4 and IPv6 supported) and subnet. 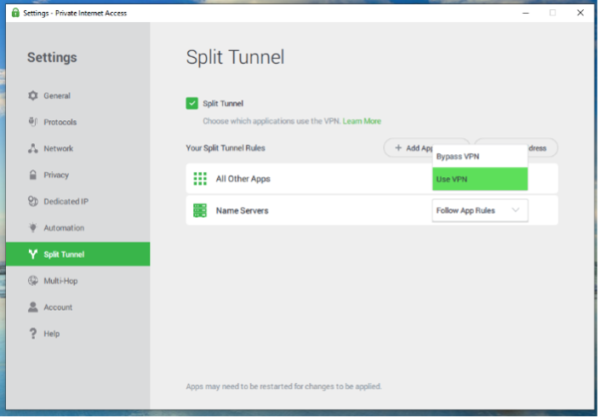 Configuring Private Internet Access (PIA) is easy, even for new users. All it takes is to subscribe to the VPN by registering an account and selecting a subscription plan. Once done, you can download the setup file according to your device.

It only takes a few minutes for the setup file to download. Once done, clicking on it will start the VPN installation, without requiring any user input. 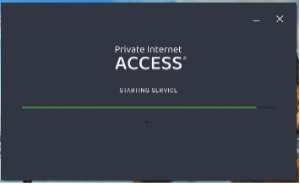 After the setup completes, the service offers the user to take a “Quick Tour” of the app. 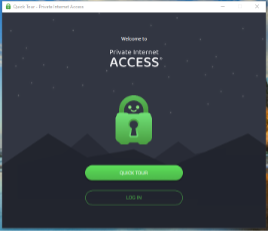 It’s beneficial for new users, especially those unfamiliar with VPNs. It explains how you customize the app with the dark theme, dashboard tiles, and more. 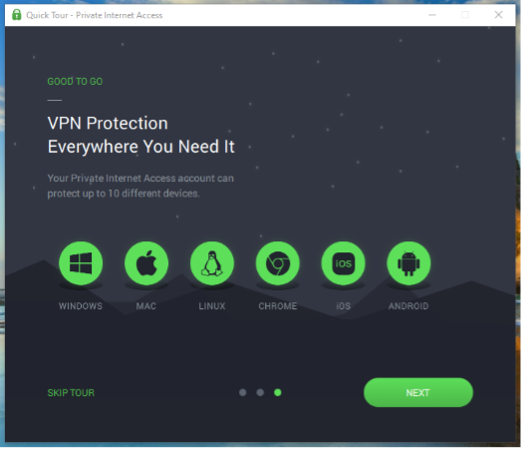 To speed up, you can even skip the tour and start using the VPN on your own. Next, you will see a prompt to enter your PIA account login credentials. 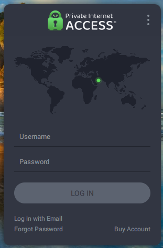 Once done, clicking on the “LOG IN” button will start the app immediately. (It doesn’t even ask you to restart your system, though you can reboot if you want.) Next, a sleek window (attached to the tray by default) appears on your screen, showing the quick start button to launch the VPN connection. 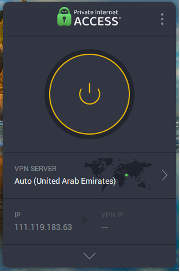 If you want to start the connection with the default VPN settings, you can choose a server and click on the button to enable the VPN tunnel.

When testing the VPN for this review, I couldn’t browse as quickly after enabling multi-hop as I did earlier. So, while it’s useful, anyone interested in using the multi-hop feature must ensure there is a fast base speed.

Besides the multi-hop issue (which didn’t occur from the VPN’s end), PIA exhibited impressive performance.

I could easily access Netflix US and Crackle using the streaming-optimized US server (East). Then, I changed my connection to the US Rhode Island location and could stream Crackle, YouTube (Movies), and Vudu without lagging issues. Later, I connected to the Italy streaming optimized server and seamlessly streamed RaiTV. So, undoubtedly, PIA is a great streaming VPN for watching foreign content.

As for gaming, I had to stick to the optimal server nearby to play Call of Duty, the other servers with Italy, Romania, and US locations worked great for the other FPS games I played. Overall, I experienced no issues with the games’ graphics and speed.

Another PIA pro is its customizable user interface, allowing users to pin the features they frequently use. The dark theme availability is also excellent.

However, PIA has an ultra-fast WireGuard protocol for an even faster ping that can improve your gaming experience.

Private Internet Access has affordable pricing plans compared to most other VPNs. In fact, given its features, it serves as a pocket-friendly VPN for budget users.

The most exciting offer from PIA comes on Cyber Monday and Black Friday, offering 83% off on its 3-year subscription plan. 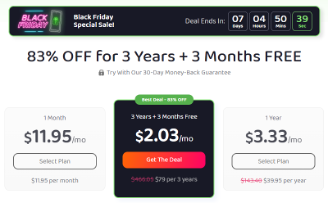 The service also offers a yearly subscription at $3.33 per month, which is affordable even for students and home users.

If you’re on the fence about purchasing the product, you can use the VPN free on your mobile phones (Android and iOS), with their 7-day free trial.

Private Internet Access (PIA) is a helpful VPN service that exhibited impressive performance during our review. Despite being headquartered in the US, the service has stuck to its no-logs policy thus prioritizing users’ privacy.

The Top 10 Games On Switch

How A Neon White Level Is Made